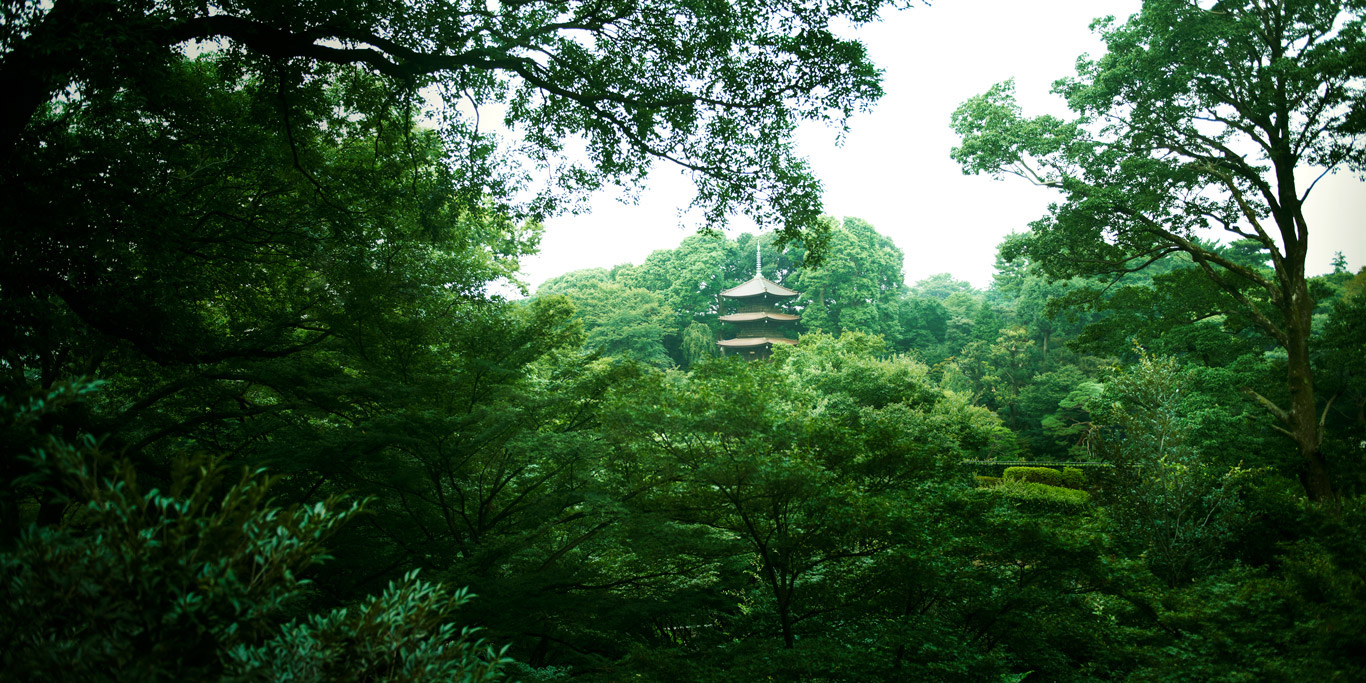 We seek nature because it reconnects us to our roots. It reminds us that we are part of a larger story that goes back far into the past. Nature is our source of wellbeing and the foundation we thrive on.

When Duke Yamagata Aritomo (1838-1922) discovered the Camellia Mountain in 1878 and decided to make it the garden of his residence, he probably thought the same. Tokyo was already a vibrant city on its way to modernization and the Duke could envision it becoming one of the greatest cities in the world. All the more reason why he wanted to keep this corner of the city in a state that would bring to mind vast sceneries of mountains and rivers.

The former Camellia Mountain is now the garden of Hotel Chinzanso Tokyo, one of the most remarkable natural sites in Japan’s capital. The garden is open to the public (*1), which means that every citizen or visitor to the city is welcome to reconnect with nature here.

However, only the guests of Hotel Chinzanso Tokyo have the chance to take a guided tour of the garden and learn about its deep links to Tokyo’s history. Once you take this tour, it will cease to be a mere garden for you. This garden has witnessed the rise of Tokyo, the development of the city during the past centuries, as well as its tragedies and recovery. The story of this fascinating metropolis is encoded in the landscape of this garden and the tour gives you the key to unlock a less-known but important side of Tokyo’s history.

Let us introduce the history of Chinzanso Garden in brief, along with a few highlights of the garden tour. If you can, please do come and enjoy the tour yourself and learn the whole story.

*1 Due to the COVID-19 outbreaks, the garden is currently open only to hotel guests and patrons of the restaurants within the precincts. Please read this article for details.

1. A Brief History of Chinzanso Garden 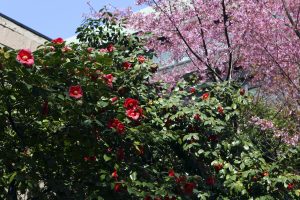 The garden of Hotel Chinzanso Tokyo is located on a hill in the heart of Tokyo, known as “Camellia Mountain” (Tsubakiyama) in historical records that go back as far as the fourteenth century. This hill was famous for camellias, which grew in thousands here. An evergreen plant, Camellia Japonica captivates the viewer with vivid red, pink, and pure white blooms that look at their most beautiful in the winter months, from February to April. Camellia blossoms are known in the West as “winter roses” and are treasured in Japan as auspicious flowers. Unlike cherry blossoms, whose petals scatter ephemerally, camellia blooms fall in one piece without scattering. This feature was highly praised by the members of the warrior class who loved camellias for their purity.

The haiku poet Matsuo Basho (1644-1694) lived for a while on this hill during the time when he was involved in building the first aqueduct in Edo, which supplied the city with clean drinkable water from the Inokashira Pond. That aqueduct is what we know today as the Kanda River, which flows right past Kabukimon, the southern gate of Chinzanso Garden. Ukiyo-e artist Utagawa Hiroshige (1797-1858) imagined and immortalized the Camellia Mountain in Basho’s days in his woodblock prints.

The Camellia Mountain became the property of Duke Yamagata Aritomo (1838-1922), a prominent military officer and statesman, twice elected prime minister of Japan, in the early days of the Meiji Period (1868-1912). Duke Yamagata was born in Hagi, a city by the Sea of Japan, surrounded on three sides by mountains, located in nowadays’ Yamaguchi Prefecture. He built his residence here turning the former Camellia Mountain into a splendid garden that reminded him of the majestic nature in his hometown. In the early days of the Chinzanso residence, the garden often hosted important high-level political meetings.

The garden of Hotel Chinzanso Tokyo became richer and even more beautiful in the hands of its next owner, Baron Fujita Heitaro (1869-1940). The Baron transferred several monuments here from various regions of Japan. The Three-Story Pagoda, the Shiratama Inari Shrine, or the Hannyaji-style stone lantern are just some of the monuments that imbue this garden with a sense of history.

In 1952, rising from the ashes of the war, the garden restaurant Chinzanso was opened to the public. This was the beginning of Hotel Chinzanso Tokyo, a facility that has built a reputation for treasuring the classic aesthetic tradition and enriching it with contemporary Japanese elegance.

The Chinzanso Garden Tour is held only on weekdays and can be booked until three days beforehand at the hotel concierge. The tour is also available with an audio guide from fall 2020. During the 30-minute walk, participants are guided to ten highlights and monuments in the garden whilst listening to their stories. There are many other elements in that garden that may attract your attention; take your time to explore them freely after the tour. Noticeboards are placed by each monument with explanations regarding their background and meaning.

Let us introduce five of the main highlights to give you a hint of why it is worth taking part in this tour. 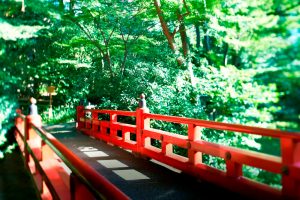 The Benkei Bridge, easy to spot due to its vibrant vermillion color, takes its name from Benkei, a famous character in the epic “The Tale of the Heike” who helped the hero Minamoto no Yoshitsune (1159-1189) to become a brilliant warrior. In early summer, fireflies can be seen surrounding this bridge. Fireflies can only live along streams with pure water and they are a truly rare sight in the city. Hotel Chinzanso Tokyo practices firefly cultivation by saving firefly eggs in an incubator during the cold months and releasing the larvae back into the creek in early spring. The fireflies develop and enchant the viewers with their beautiful lights from mid-May until June.

Waterfalls are considered sacred in Japan. The Gojo Waterfall, while artificial, brings the refreshing sound and the sacred atmosphere of a waterfall into the miniature landscape of the garden. The water flows into the Yusuichi Pond, which was made at Duke Yamagata’s wish to recreate the mountain scenery of his home region, Hagi. The sound of the waterfall and the sounds of the insects and birds combine to create the typical summer soundscape that the Japanese hold dear. 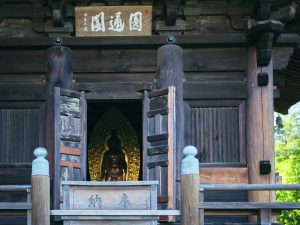 Entsukaku, the Three-Story Pagoda that stands on top of the hill, was brought by Baron Fujita Heitaro all the way from Hiroshima in the 1920s. It was recovered from a temple that was falling into ruin. The age of some of the beams in this structure suggests that it was originally built around 1420, making it one of the oldest wooden pagodas in Japan.

The Shiratama Inari Shrine was brought from Kyoto’s Shimogamo Shrine, a prominent shrine with ancient roots that has played an important role throughout Japanese history. The white foxes are considered messengers of Inari, the guardian deity of crops and prosperity. It is believed that they carry people’s prayers to the deity.

The Sacred Tree, an oak tree thought to be at least 500 years old, has survived several fires and disasters, most notably the fires after the Great Tokyo Earthquake of 1923 that ravaged the entire area. It has been standing there watching over the garden and bearing witness to the changes that happened to the city during the past five centuries. Visitors will notice it is surrounded by a shimenawa rope used in Shinto practices to mark sacred objects and spaces.

In addition to the five monuments mentioned above, the tour includes five more highlights that reveal the history of the beautiful Chinzanso Garden. There are more statues and structures besides the tour course that will also leave a lasting impression.

What makes nature different from anything created by human hands is that it changes from day to day and from season to season. This means that, no matter how many times you visit Chinzanso Garden, you’ll be able to enjoy different scenery each time. 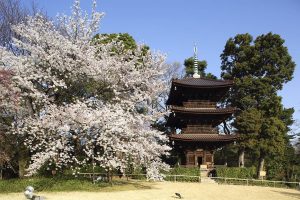 Come in spring and you’ll marvel at gorgeous cherry blossoms with the Three-Story Pagoda in the background. The cherry blossoms in the Chinzanso Garden are illuminated in the evenings, creating a dreamlike atmosphere. Visit in the summer months and you’ll be able to enjoy the refreshing greenery and the refreshing sound of the waterfall. At night, you’ll be enshrouded in a magical atmosphere created by fireflies brightening up the dark, amid the sounds of crickets and cicadas.

In the fall, the many maple trees in the garden go ablaze in vibrant reds, oranges and yellows. From October 1st, 2020, hotel guests can enjoy viewing a veil of mist enshrouding the silent garden every morning. When viewed from the higher levels of the hotel, the mist looks just like a sea of clouds–a scenery that can usually be seen only in remote mountain areas.

But nothing surpasses the beauty of the garden in winter when thousands of camellias go in bloom amid the otherwise dreary scenery. There are currently one thousand camellia bushes in the garden but Hotel Chinzanso Tokyo plans to plant up to ten thousand camellias by 2022 when it reaches its 70th anniversary. The history of the Camellia Mountain is thus taken into the future.

4. Discover the Secrets of Chinzanso Garden 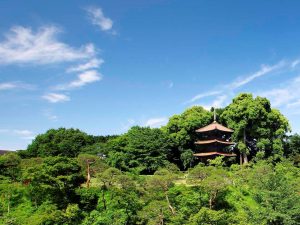 The most important thing that garden tour participants will learn is the ability to look at a Japanese garden with the eyes of the heart. Every monument and structure, the ponds, the river, the waterfall, and even some of the trees are “stand-ins” for pieces of history and legends that combine to create the larger-than-life, invisible story of this garden.

Hotel guests who take this tour will be able to understand the vision that Duke Yamagata had for this garden, a miniature recreation of a wide scenery with mountains, rivers, and the sea. The tour reveals this garden as the key natural place that connects the metropolis of Tokyo to the endless flow of time that encompasses history and future.

Please do take this opportunity to stay at Hotel Chinzanso Tokyo and enjoy the garden tour. It is a chance to learn about the dreams and visions of the people who laid the foundations of Tokyo City. The garden tour is also an excellent introduction to the deep layers of Japanese culture, which was born as a reflection of and in coexistence with nature.